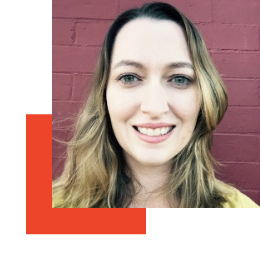 Jessica Craft, Founding Executive Director of Rock to the Future, an organization that provides free music programs for Philadelphia youth, is a 2017 graduate of the Arts + Business Council’s Designing Leadership program. As the leader of a team of three full-time and twenty part-time employees and dozens of volunteers, Craft strives to unite people of different personalities and backgrounds in order to work together towards the common goal of using music to support academic achievement, ignite passion and creativity, and build confidence.

Realizing her “warrior” leadership style, as determined by a leadership quiz she took during Designing Leadership, Craft has committed to stay focused on bettering not only herself but also her team so that they can continue to prepare the next generation for all stages through free music programs for students in high-need neighborhoods and under-resourced schools. Since completing Designing Leadership, Craft and her team at Rock to the Future have achieved significant growth and successes. As part of its three-year plan to serve additional youth, the organization partnered with Roosevelt Elementary School, a “turnaround school” in Germantown, in 2018. Together, they doubled the number of students served through Rock to the Future’s award winning MusiCore After School program — which boasts a 100% post-secondary education rate at their premier Kensington location. Additionally, Rock to the Future added two additional MobileMusic partners to its school day workshops in Kensington. Rock to the Future now serves over 300 youth each year through in-school, after-school, and summer programming, and programs remain free for participants.

Designing Leadership has had a significant impact on Craft’s commitment to supporting, cultivating, and championing Philadelphia’s creative community: “Designing Leadership introduced me to a number of industries that I didn’t even know existed and to other nonprofit leaders, and I had the chance to meet and learn from those that I aspire to become. … My passion is making arts accessible for those who otherwise wouldn’t have the opportunity, and opportunities like Designing Leadership are a catalyst for relationship building that makes the sector stronger.” In 2018, Craft enrolled her development director into the Designing Leadership program and she plans to do so for her program director later this year. “Investing in myself and in my team is helping us serve more students, providing them with a better experience, and creating a better organizational culture.”