The Arts + Business Council is proud to announce the 2021 Anne D’Harnoncourt Award for Artistic Excellence honoree, Robert A.M. Stern, who is being awarded for his contribution to Philadelphia’s architectural vitality, and for his lifetime dedication to American architectural history and education. 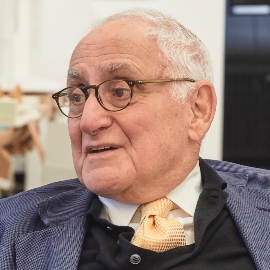 Robert A.M. Stern, practicing architect, teacher, and writer, is founder and Senior Partner of Robert A.M. Stern Architects. His firm has completed a number of notable projects in Philadelphia, including Comcast Center; the Museum of the American Revolution; a master plan for the Navy Yard and two buildings there; buildings at the University of Pennsylvania, Drexel University, and Villanova University; and two residential towers: 10 Rittenhouse Square and The Alexander at 1601 Vine Street.

Mr. Stern served as Dean of the Yale School of Architecture from 1998 to 2016, and in 2017 was honored with the Topaz Medallion, awarded jointly by the American Institute of Architects and the Association of Collegiate Schools of Architecture in recognition of outstanding service to architectural education. He was the 2011 Driehaus Prize laureate and received the Master Builders’ Award from the Carpenters’ Company in 2012.

He is the author or co-author of more than a dozen books, including Tradition and Invention in Architecture: Conversations and Essays; Paradise Planned: The Garden Suburb and the Modern City; and a five-volume series of books on the development of New York City’s architecture and urbanism, including National Book Award-nominated New York 1930. Twenty-four books on Mr. Stern’s work have been published, including most recently Houses: Robert A.M. Stern Architects (The Monacelli Press, 2021). Mr. Stern’s work has been exhibited at numerous galleries and universities and is in the permanent collections of the Museum of Modern Art and the Metropolitan Museum of Art, among others.